The Eurovision Song Contest has announced a change in its rules to ensure it can continue every year, whatever the global circumstances. The new rule, announced by new Executive Supervisor. Martin Österdahl will come into effect next year as one-year trial and will allowed recorded backing vocals. 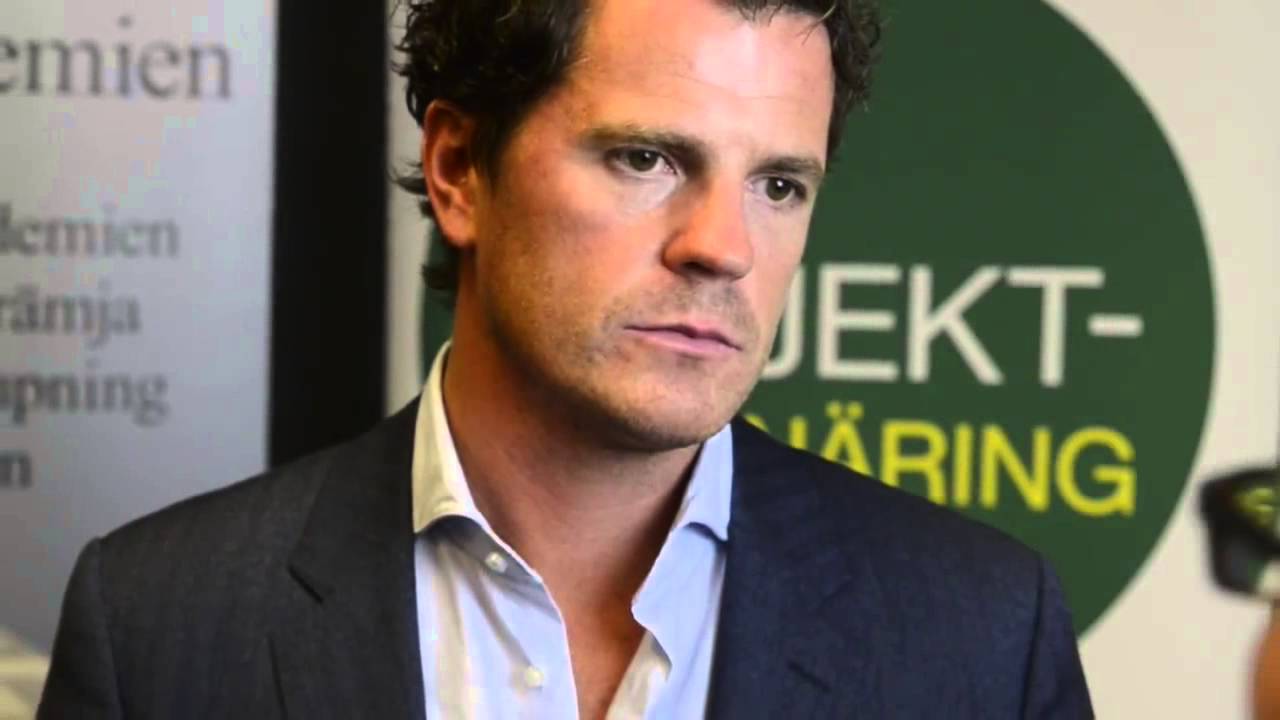 As official charts reported today: "The idea behind the move is to allow participating broadcasters to explore new creative ideas and reduce the technical burdens on the hosting country. Sustainability was also a contributing factor: the use of backing vocals means smaller teams from each country traveling to the contest.It also means producers and songwriters can present their music as closely as possible to the original composition on the night.The use of recorded backing vocals will only be optional - a combination of live and recorded backing vocals is also allowed. "

The new supervisior daid: "We have updated the rules of the Eurovision Song Contest so that, should it be necessary, we are able to make modifications to the format of the shows and the organization of the event that would allow the Contest to still take place despite restrictions imposed on us by a now unknown scenario. The old rules did not allow this. " But why hasn't this happened this year?

Dates for next year have already been announced. Semi-finals will take place on May 18 and May 20 and the Grand Final on May 22. 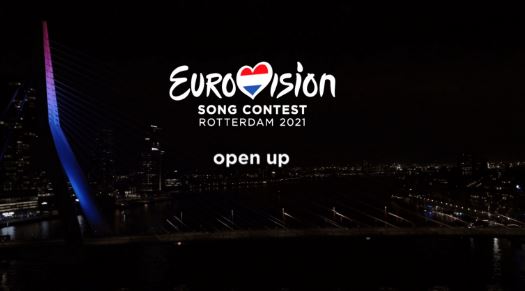 Analysis: Was this edition of ESC a success on the charts?

Was this edition of ESC a success on the charts?

These days the musical offer that we have is so big that only with a good promotion, with rare exceptions, we see great hits or commercial successes that remain for weeks or months in people's ears, on the radio and on the charts.

The successes of the last few years only appear on the charts of the various countries for a couple of weeks, except for the winner in the winning country. This year, without competition and with only a few samples of the participating songs, the successes are not many.

Only the song from Iceland entered the UK Top 100 Official Chart at a good number 43 considering that it is a Eurovision song. Considering that the last ESC winners, Salvador Sobral peaked 97, Netta peaked 49 and Duncan Laurence peaked 67, it is possible to consider that "Think about things" achieved a good mark this year. Perhaps it had been the winning song. All of the songs mentioned above styed only for a week on the UK Chart.  Dadi is not expected to stay two weeks in one of the most active and important Charts in the world. If the Icelandic song is still there next week it will be a success! On the chart in Sweden the song entered number 33, but in early April peaked 3 on the Belgian Chart.

The truth is that the compilation of ESC in its opening week achieved a good success on the various charts of several European countries: # 1 in the UK, # 2 in Germany, # 1 in Belgium, etc. But we have to be restrained. With confinement there are not many releases and much less compilations since production is down. The reality is that in the opening week the compilation of ESC has this type of behavior on the charts. Unfortunately it always falls quickly.

It should also be noted that in the organizing country, no song entered the Dutch Chart.

And on Itunes, after a week, the success still remains for the songs, but without the great enthusiasm of other years. Let's see how the entries that were most successful last week are positioned.

It is a case to reinforce the idea that there were good songs that could have been more successful than they are (or not) if there had been a decent Festival that promoted the artists as it should have occurred.

Every year we pay attention to iTunes to see immediate sales and trends regarding Eurovision songs. We do it every year, on the morning of the day of the grand final. This year, there were no finals or a grand final. There was just the show we were able to see last night. Still, the charts responded, despite the 30 seconds of each song. We consider iTunes and in countries where this platform is not used, we look at the youtube trending chart. Why iTunes? Because it has updated charts, a big representation and is easy to consult. It is still better for this type of work than Spotify. So it is a type of immediate trend that can show what caught the attention of the audience last night.

And the surprises would have been many!

The unsurprises were also clear: 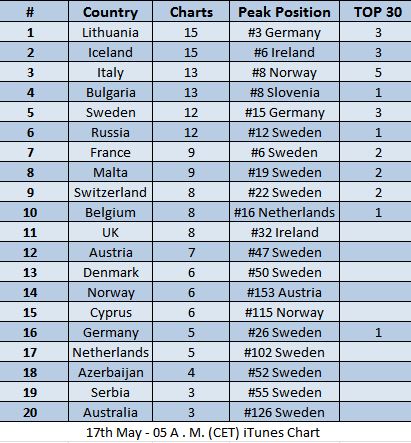 But after all, who won or lost Eurovision 2020?

With the betting exchanges stopped, without trials and performances, we can remember that in recent years there have been no surprises. Bulgaria, Lithuania, Switzerland and Iceland were already standing out in the bets, would they continue?

For the INFE fan club Iceland would win; for the biggest fan club, OGAE, won Lithuania. On the charts, the victory would be between Iceland and Lithuania. Since there have been no surprises in recent years, the only surprise would be if these two countries that never won had not seen their first victory!

Contrary to what you tried to get through last night, there will have been more losses than gains. Producers, musicians, singers, authors, choreographers and managers, among others, were unable to show themselves during their minimum of 3 minutes and only had a maximum of 30 seconds. And no, they didn't all win! Eurovision 2020 was canceled and with it, the dreams of many who have been preparing for months. In the 21st century we could have used all the technology we had available, but this ESC that did not happen served to verify that after all Salvador may be right, and after all, fireworks are the most important, at least since Eurovision became commercially on a brand.

We have already shown that we are sad because there will be no ESC 2020! Although EBU decided on Shine a Light, we wanted to join the celebration by honoring artists in our own way with two events: A WHERE ARE THEY NOW special? and an ALL TIME ALBUMS CHART TOP150! Join us in the eurovision week!

Our team decided to create a list of all the albums from ESC artists that every fan must have! We spent allmost one year creating it and because ESC 2020 is cancelled we decide to present it you now! Of course we couldn't consider all the artists and of course it might have some we forgot.

There are some criteria that we had to consider such as the innovation of an album for its time, its creative aspect, its success, its importance in the history of music and also, not to repeat albums by the same artist. The task was hard and so there is a lot of responsibility. It is not easy to order albums with the tastes of more than 10 people, so we decided to leave the best 25 (in our opinion) in the hands of our readers. Voting will take place in the Eurovision week of 2020!

So, during today we will announce the ranking from 150 to 26! You are invited to help us decide!

Where are they now - Special

From today, we will we will remember a Eurovision artist every day and try to find out what is made of them in music. Do not expect to discover things about artists that we are breaking news from time to time. They will be artists that we haven't known anything for a long time. From the 60s to the 90s! 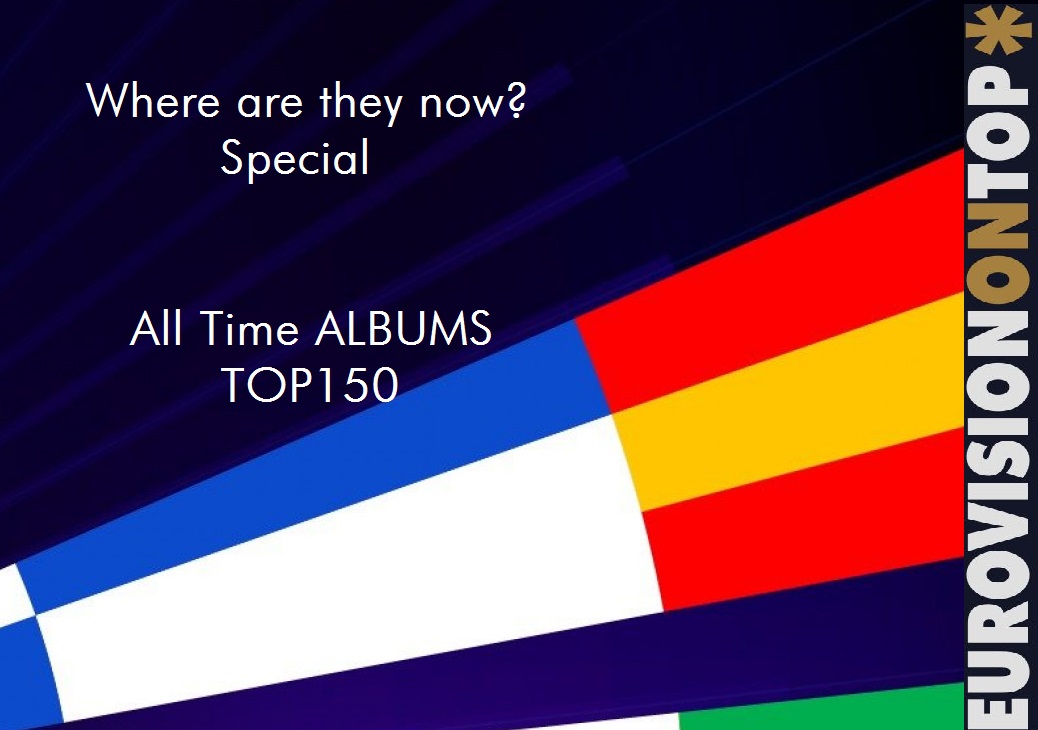 Eurovision Shine a Light and some alternatives to the contest

Next Sunday would be the official opening of the Eurovision Song Contest 2020, in an event that was expected to be iconic because it was the 65th anniversary in a year in itself numerically interesting: 20 - 20. The current pandemic has tripped us up and the event was canceled . However, and as no alternatives were found for holding the event as a competition, EBU decided to schedule a special broadcast to be held on the day scheduled for the Grand Final: “Eurovision Shine a Light”. Celebrating Eurovision at a distance while maintaining the spirit of the event and with the union of a Europe in confinement will certainly not be expected by the majority of fans who will remain in the unknown without knowing who would be the winner! "Eurovision: Europe Shine a Light" takes place in Hilversum, in the Netherlands and will be a tribute to Eurovision and its artists, which include this year's competitors, or as this year's CD announces, a tribute to the participants! Certainly, it would not have been very difficult to involve the public in a vote.

Many European television channels have scheduled special broadcasts dedicated to the Eurovision Festival, either through the dissemination of competing songs, documentaries or interviews and even with votes. 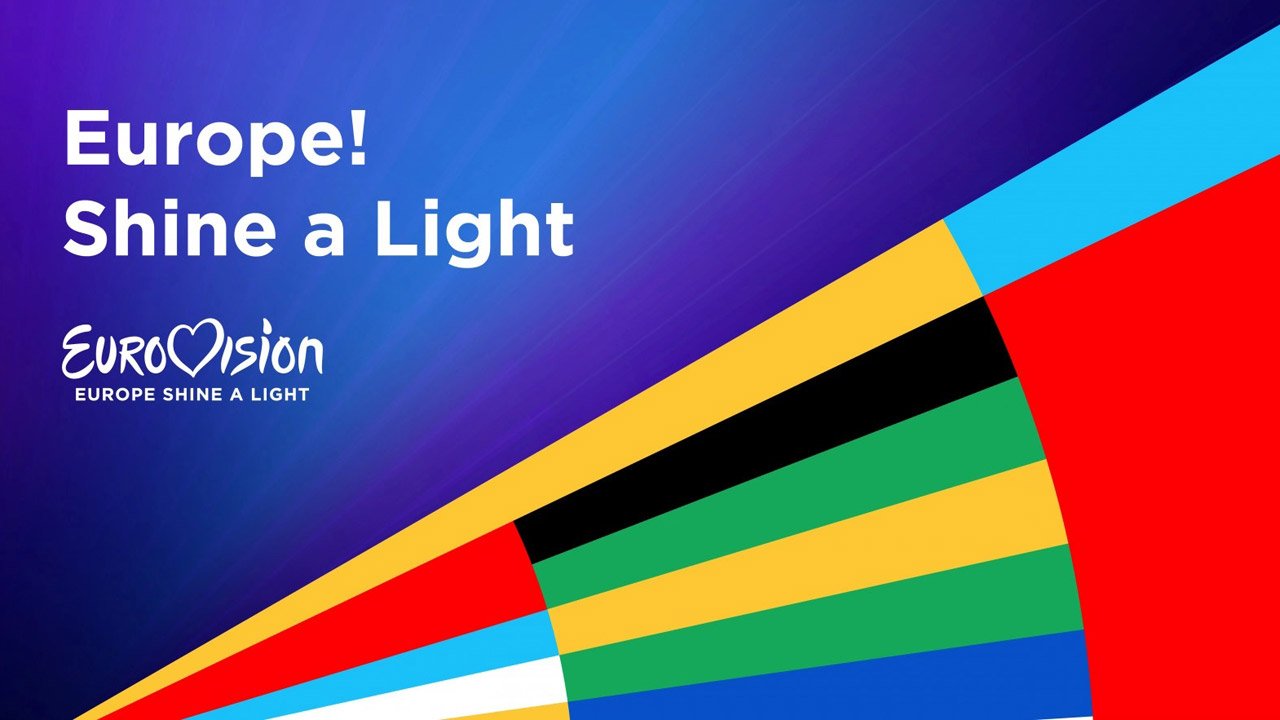 However, on ESC's youtube channel there will be a space to celebrate the semifinals. On Tuesday, May 12, EBU will highlight the songs that would compete in the first semifinal, including the host country, the Netherlands, and two of the Big 5: Germany and Italy. During the show, a fun interval act is planned. The second online program on Thursday, May 14, will release the songs chosen for the second semifinal and will include the rest of the Big5: France, Spain and the United Kingdom. Here, there will also be a fun interval act with some cooking and visualization about the confinement of competitors.

Fans will also have their space and can participate with their recordings dancing and singing the songs of 2020. Information about this participation, if you wish to do so, can be consulted on the eurovision.tv website

However, OGAE International fans, taking advantage of the absence of a real competition, decided to reinvent their annual vote and turn it into a kind of alternative to the contest.

This OGAE event will be the closest we will see this year as a contest!

At 8 p.m. CET the event will start on the YouTube channel of OGAE International https://www.youtube.com/channel/UChIR-_6yqXwAJT-WLRWwDww, precisely on May 15, the day before the supposed grand final.